Three Rookies Tearing Up The Preseason

Preseason must always be taken with a grain of salt, but it’s the first place many rookies showcase their talents against NFL players. It isn’t necessarily predictive of success, but it is important to note when players both pop off the screen and have the opportunity and measureables to back it up. Let’s take a look at three guys who may warrant late-round consideration.

The Lions selected this Northern Illinois product in the third round of this year’s draft – and for good reason. Here are some of his college metrics, courtesy of PlayerProfiler.com.

All incredibly impressive stats. According to Graham Barfield of Rotoworld, the Lions ran a 3WR set 75% of the time last year, opening up an opportunity for Golladay. Anquan Boldin’s departure frees up red-zone targets, while Golden Tate and Eric Ebron haven’t been great at converting inside the 20-yard line. At 6’4″ with ball skills, he could fill that role nicely.

While unlikely to make an immediate impact this year, Gathers is dominating any safety or linebacker who tries to cover him. A college basketball player at Baylor who hasn’t played organized football since he was 13, Gathers is the next promising converted-power-forward TE. He has a fine mentor in Jason Witten and put up some incredible Pro Day numbers for such a large man.

Take a look at his touchdown this past week against the Rams:

A personal favorite of many in the draft community, including the esteemed Josh Norris of Rotoworld, who compared Taylor to Emmanuel Sanders as a smallish player with not only playmaking ability but the “my ball” mentality of a much larger receiver. Let’s see how they compare as prospects courtesy of RotoViz. 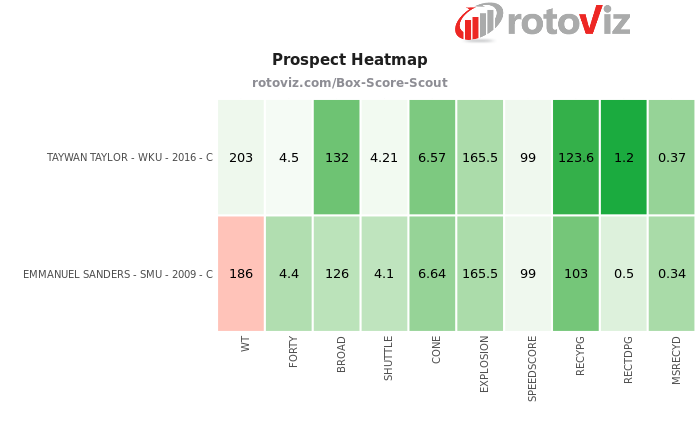 In many measurements, Taylor is either equal or superior to Sanders as a prospect. Considering the injury issues that Corey Davis and Eric Decker have experienced the past 12 months, Taylor could sneak his way into 3WR sets sooner rather than later. He flashed some of those skills against the Jets this past week.