In many seasons, we see tight ends drafted late who wildly outperform their draft position. Last year the undervalued tight ends were Darren Waller and Mark Andrews, while the year prior it was George Kittle. Those are the type of selections that help you win fantasy leagues. Who are some players that fit the mold of these “breakout” undervalued tight ends this year?

Hunter Henry has been nothing but efficient since stepping on an NFL field. He joined Rob Gronkowski and George Kittle as the only tight ends to have over eight yards per target (YPT) on 50 or more targets in each of their first three seasons playing in the league. He’s also in a very strong cohort for future success based on his rookie season. 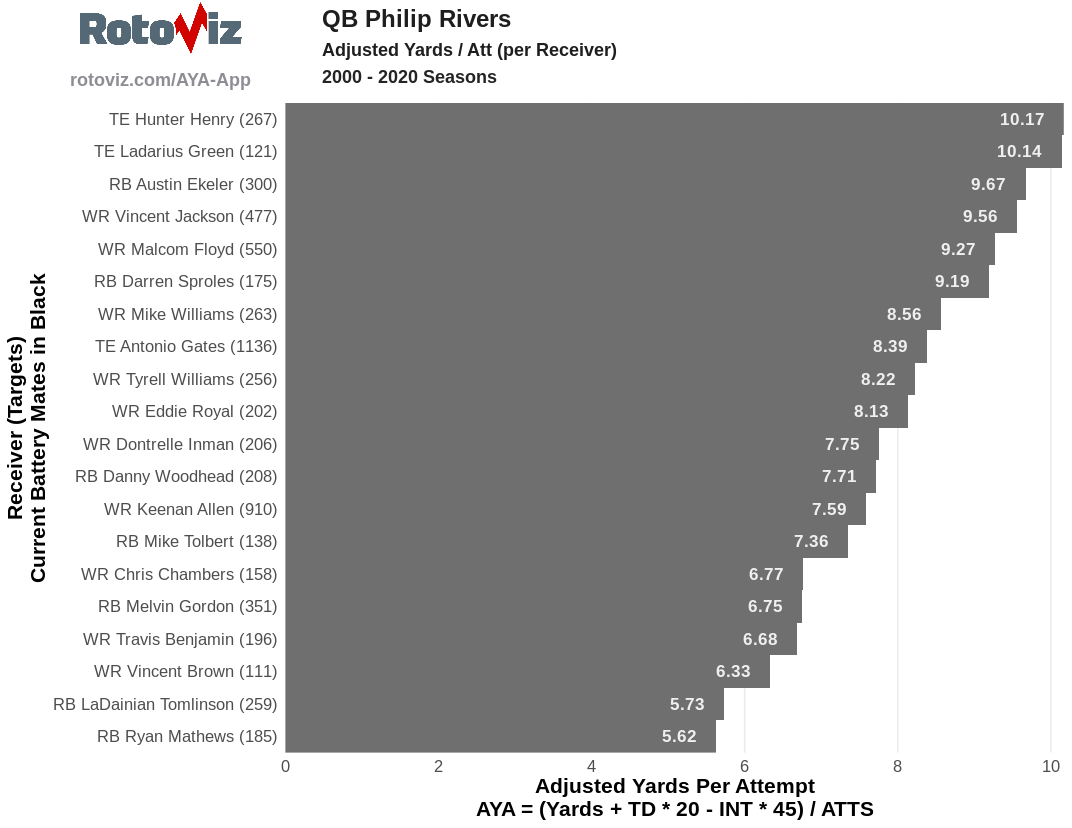 He also happens to be the most efficient target Philip Rivers has ever played with. That includes top weapons such as Antonio Gates, Keenan Allen, and Vincent Jackson. It’s clear that what Hunter Henry has shown us on the field is that he is a very good player who profiles as a TE who should become elite.

Last year, Henry missed the first four games of the season with a tibia fracture. When he came back he performed at a high level, with a full-season pace of 200 PPR points. 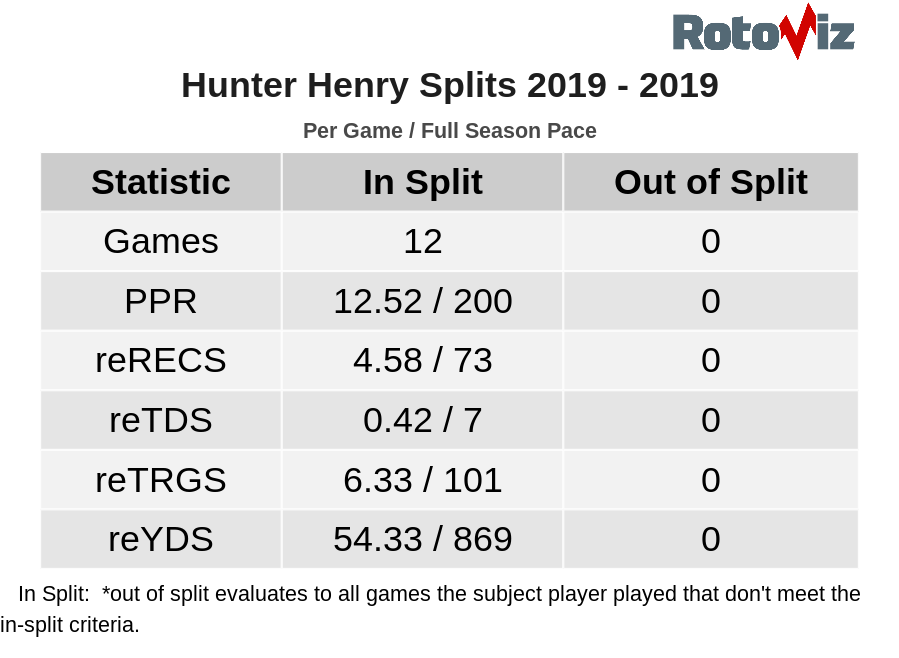 His full-season pace of 200 PPR points would have been equivalent to the average TE3 finish since 2000.

The quarterback change in Los Angeles actually may be a positive for Henry. With no pre-conceived chemistry with any of the weapons on the team, Henry could soak up a bigger share of the targets in this offense.

Hunter Henry will also be entering this season at the prime age of 25. This is important because we see the most “peak” tight end seasons from players who are 25 years old.

We want to be targeting good tight ends with strong profiles and Henry checks all the boxes with a discounted ADP of 9.10 in early Apex drafts.

Noah Fant was an incredible prospect coming out of college who checked every single box.

He did this while playing alongside fellow 1st round pick TJ Hockenson in college. Per Player Profiler, his closest comparable is elite TE George Kittle.

Research by Blair Andrews shows that 21-year-old tight ends see a massive increase in production in Year 2. Noah Fant played the majority of his rookie season at age 21.

We know that rookie year efficiency is important in determining a tight end’s future success. Noah Fant joins that exclusive group of TEs to average over eight YPT as a rookie on 40 or more targets. Of the tight ends on that list, we saw an average increase in fantasy points of 59.2 percent in their 2nd year.

Going forward, Fant has a high probability of becoming one of the best tight ends in the league at some point. Take advantage of his current 12th round ADP with the upside to make that massive leap as early as this season.

It’s clear that Herndon’s rookie season was among the best we have seen from a tight end in the past couple of decades. Not only was he efficient, but he was second on the Jets in receptions, receiving yards, and touchdowns as a rookie despite only playing 14 games.

Herndon played a total of 18 snaps before injuries took his second season away from him. It was a lost season for Herndon. As mentioned above, we saw the efficient rookie TEs (a cohort that he’s placed himself in) increase their PPR scoring by 59.2 percent the following season. Considering he barely played last year, it’s a fair argument to consider this upcoming season as the sequel.

The Jets have 218 vacated targets from last season – so there is certainly an opportunity for Herndon to carve out a solid role within this offense this year. The past production of Breshad Perriman and Jamison Crowder lead us to believe they aren’t massive threats to prevent a player like Herndon from receiving meaningful targets. Denzel Mims could be the best receiver of the bunch, but as a rookie, which makes him unlikely to produce at a high level in Year 1. Putting this together, it’s not out of the question that Herndon can potentially be the top target in this offense.

Herndon is being criminally undervalued this year as he’s going as the TE22 this season. Based on his rookie season, there is reason to believe that he has top-5 TE potential (despite the fact that Adam Gase ruins everything he touches).

Over the past two seasons, we have seen undervalued tight ends with very similar rookie seasons to these guys break out. George Kittle and Mark Andrews made the jump in Year 2 and are now amongst the best at the position, despite having double-digit round ADPs before their breakout.

The better we are able to identify these breakout players, the better chance we have of winning. These players have very strong cases for being the next tight end breakouts this season.

Big shoutout to Pro Football Reference for the data that allows this research to be possible. Be sure to follow me Twitter for informative tweets as we approach fantasy draft season.

I went into a mock draft room and I am new at this and I couldn’t figure how to draft my player when it was time for me to draft, Any tips would really help. Thanks Ken I have a draft next Friday.

Please email us at apexffml@gmail.com if you still need assistance.