Two Wide Receivers I Want in Every Draft

Every offseason, I become enamored with a few players. Admittedly, there is an element of confirmation bias – these are often players I previously liked, and my beliefs were confirmed from their standout rookie seasons. They were so good, in fact, that I’m happy to go back to the well even with an increase in price because we know how common second-year breakouts are.

You don’t have to go far back to find them either: D.K. Metcalf and A.J. Brown took the league by storm last year, outperforming their ADP by multiple rounds despite their not-insignificant 2020 costs. In 2019, it was D.J. Moore, D.J. Chark, Courtland Sutton, and Michael Gallup. I can keep going on and on, but I think you get the point: second-year wide receivers are the key to winning fantasy football leagues.

Here are the two second-year wide receivers that I want in every draft.

Likely due to Ja’Marr Chase being selected, owners are questioning Tee Higgins and allowing him to fall in drafts. First and foremost, the impact of pass-catching teammates is overstated by fantasy analysts. Yes, Chase will steal some of Higgins’ targets – but his efficiency will rise due to opposing defenses having to worry about Chase and Tyler Boyd.

Need examples? D.K. Metcalf was a league winner even with Tyler Lockett demanding targets, same with A.J. Brown and Corey Davis. Adam Thielen has now produced with Stefon Diggs and Justin Jefferson. Want more upside? In 2019, Chris Godwin and Mike Evans both finished as top-4 wide receivers in terms of points per game. There are plenty more examples, but it will suffice to say that it is far from a negative to have elite pass-catchers opposite each other. This “effect” is based even further from reality nowadays, considering the rise in the pace of play and passing (as well as overall offensive) production.

Now that we’re past the fallacious “pass-catching teammate” narrative, let’s talk about why Higgins is a gem.

In terms of total stats, Higgins collected 908 receiving yards and six touchdowns. That’s good for last year’s WR28 finish despite missing a game and only having 10 games of Joe Burrow.

And that’s just the cherry on top because even without closely evaluating his rookie season, Higgins was objectively sensational.

If we use the RotoViz Screener to find the most similar players based on Higgins’ age, weight, draft position, receiving stats, and efficiency, here are the results. 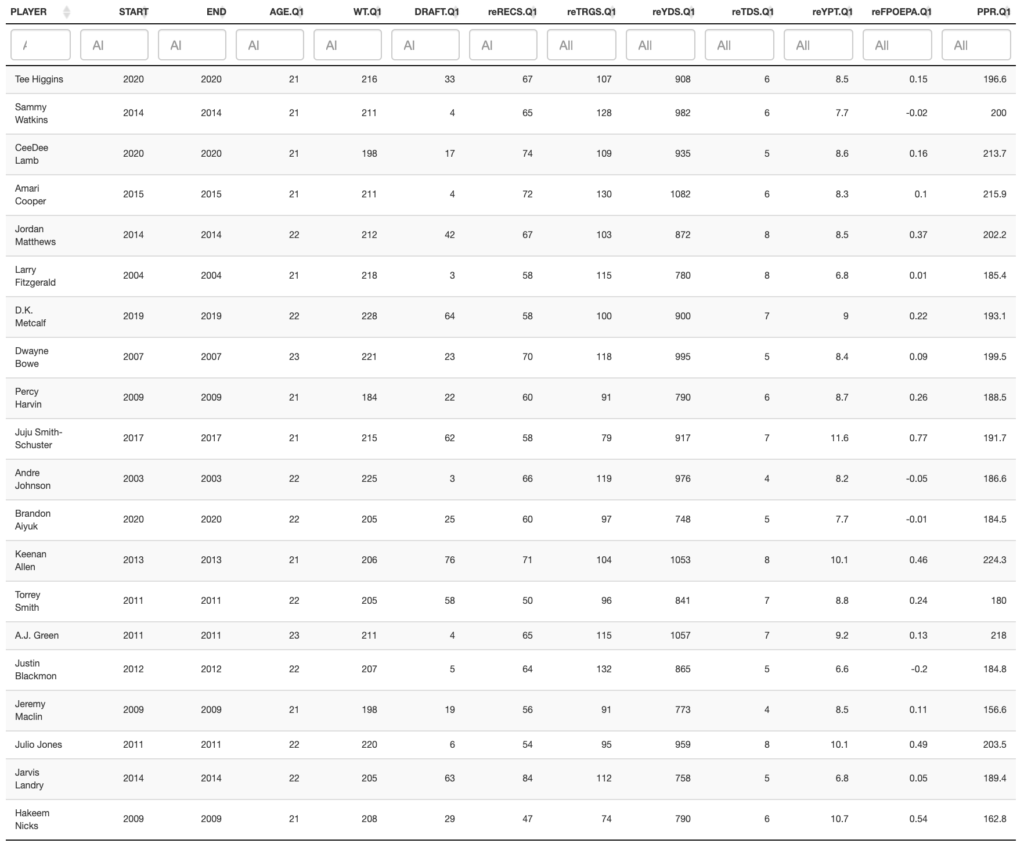 This is a truly insane list of comparable players by any stretch of the imagination. Every wide receiver on this list has at least one WR2 finish in their career. You can exclude Justin Blackmon for his partial season, but Blackmon was still the WR7 in PPG. Even Brandon Aiyuk and CeeDee Lamb were WR2s as rookies on a per-game basis.

Torrey Smith and Jordan Matthews are the “misses” here, but both finished seasons as WR2s. As shown by the objective list, Higgins is much more likely to be a perennial WR1 candidate than a “miss”.

If I asked you prior to reading this article, do you think that Higgins as a rookie outscored Larry Fitzgerald, Andre Johnson, and D.K. Metcalf?

It may have only been by a few PPR points, but he did. And it’s extremely impressive.

Go ahead and bet on Higgins missing at your own peril – I’ll be betting on the Bengals having two of the league’s best WRs for the next six or more years.

Like D.K. Metcalf, Chase Claypool is the definition of a physical freak at wide receiver. Both have a 99th percentile speed score, and Claypool is somehow an inch taller and 10 lbs. heavier than Metcalf.

As a rookie, Claypool was objectively excellent, finishing with 11 touchdowns despite starting just six games. Somehow, the highest snap percentage for Claypool in a game was 81 percent while logging 11 games with a snap share under 69 percent. In other words, his target ceiling has yet to even be approached.

But he played so well as a rookie that you would think he was a full-time player. Like Higgins, his RotoViz Screener comparable players paint a picture of a future superstar. 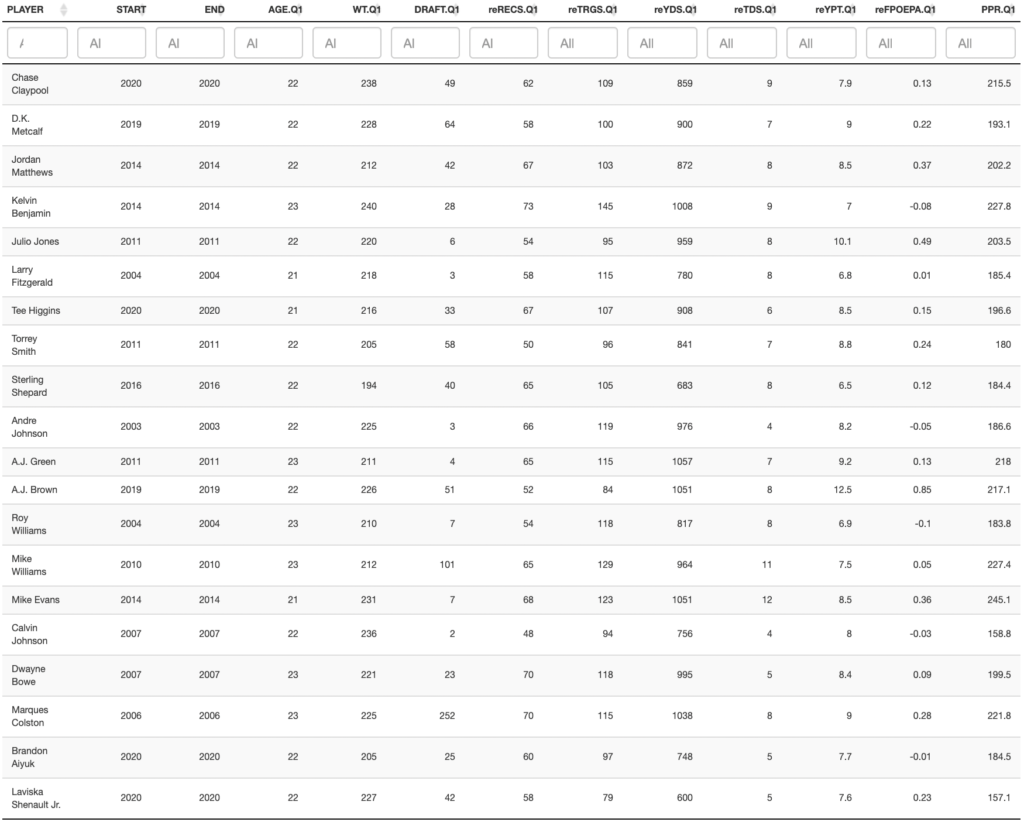 If every objective tool likes him, what’s stopping drafters from selecting Claypool earlier?

One primary concern stems from his target share with teammates Diontae Johnson and JuJu Smith-Schuster. Let’s see how their efficiency compared on a per-target basis last season.

Heading into his second season, I expect Claypool to make the jump to alpha dog and lead this passing offense in 2021.

The other potential concern is Ben Roethlisberger, which is a valid concern. But a lack of efficiency leads to more volume, which is exactly what happened last year. The Steelers finished 29th in yards per attempt, but first in attempts. Those extra pass attempts should lead to more targets for the Steelers’ best pass catcher and help offset efficiency concerns from an aging quarterback.

Players make a huge jump heading into their second season and it results in league-winning opportunities for fantasy drafters. Higgins and Claypool were both magnificent as rookies, which leads to a very reasonable expectation that they will make the jump as sophomores.

If you need any additional ammunition, Dalton Kates wrote A Simple Hack For Finding Superstar Receivers last January. He included rookie wide receivers with 80 targets, who averaged 8 yards per target, weigh at least 210 lbs., played their rookie season at 23 or younger, and were drafted in the top three rounds of the NFL draft.

Since 2000, 15 of 15 wide receivers had at least one season over 230 PPR points, while 14 of 15 had multiple seasons over 200 PPR points. A.J. Brown and D.K. Metcalf made the list last year, and Tee Higgins and Chase Claypool are among the newest qualifiers to that list. Avoiding them in drafts is a likely unwise decision.

I enjoy ur leagues