While their circumstances aren’t entirely the same, 2021 Antonio Gibson is certainly putting off 2016 David Johnson vibes. After an impressive rookie campaign, Antonio Gibson is shaping up to be a player that should be coveted in your 2021 fantasy league.

To start, players like Gibson and Johnson don’t grow on trees. Fast 220 lb. running backs with receiving abilities are rare. Let’s look at all the 220 lb. rookie running backs since 2000 to score at least 200 PPR points.

Despite playing essentially just 13 games, Antonio Gibson made the list. Remember, in Week 12, Gibson played just four snaps before being removed from the game with turf toe. Gibson and Johnson are the two lowest selections in the NFL Draft to make the list.

Below are the raw stats from each season.

Out of the 2020 draft class, only Gibson and Jonathan Taylor made this impressive list. Obviously, these are some of the most impressive rookies over the past two decades and many have gone on to have sustained success in the NFL. Johnson and Gibson lead the cohort in TD rate per rush. It helps to have the lowest volume of the cohort for this particular metric, but the touchdowns illustrate the explosive nature of the two players.

Speaking of explosiveness, here are the 40 times of the players listed above.

While speed isn’t everything, guys who can run sub-4.5 40-times appear to be pretty special. Jonathan Taylor, Gibson, Saquon Barkley, and Adrian Peterson are the only ones to run the test in 4.4 seconds or less.

Let’s compare Johnson and Gibson more closely to examine how similar they are. Entering the NFL, both players were extremely impressive athletic specimens.

Selected 20 picks before Johnson, Gibson entered the NFL a couple of years younger at a similar weight. Gibson is impressively faster with a magnificent 99th percentile speed score, although Johnson was the superior leaper in the jumping drills. Athletically, both players are special even by NFL standards.

Production-wise, Gibson was used as a wide receiver in college, so his college numbers don’t necessarily contextualize his profile. Gibson had just 34 rushing attempts in college.

Johnson was so impressive athletically and productive in college that I called him a league-winning steal before the 2015 season on RotoViz. Skeptics were concerned about his competition at Northern Iowa, but he turned out to be a league-winner in both 2015 and 2016.

Let’s compare the two as rushers after their rookie seasons.

Gibson ran just over four more times per game for 20.5 more yards, edging Johnson in touchdowns and fantasy points over expectation per attempt. Johnson was the superior player in the passing game.

Despite the lack of explosive receiving production, Gibson scored more PPR fantasy points per game – even when including the game in which he departed early due to injury. Note that Gibson played just 44% of his team’s snaps as a rookie, while Johnson played 37%.

When you include the games that Gibson played over 40% of the snaps, 11 games are included. Here are his per-game averages.

Quite impressive for a rookie who had never started as a running back before. That’s more PPR points per game than Ezekiel Elliott, Joe Mixon, and Austin Ekeler (who is also undervalued) averaged last year – all of whom are being drafted ahead of Gibson.

Obviously, Gibson is a good rusher who benefited from touchdowns, but why should we expect him to score more in 2021?

The Value of Receiving

Like Johnson, Antonio Gibson is a natural receiver. As a senior in 2019, Gibson finished second on the team in receiving yards and touchdowns, but you can easily argue he should have been used even more.

Damonte Coxie was funneled the ball, but it can be objectively argued that Gibson should have been targeted much more frequently. Gibson averaged 3.1 more yards per target and scored more than twice as frequently per target than the team’s leading receiver.

If you’re a film watcher, maybe you’d prefer to watch how explosive Gibson was as a receiver. You’ll come to the same conclusion about his receiving abilities. He is literally as explosive as they come.

So, what’s stopping Gibson from producing more as a receiver? Are we this worried about J.D. McKissic?

McKissic was certainly valuable in fantasy leagues last season, catching 80 of 110 targets for 589 receiving yards. Let’s see how he compared to Gibson on a per-target basis. 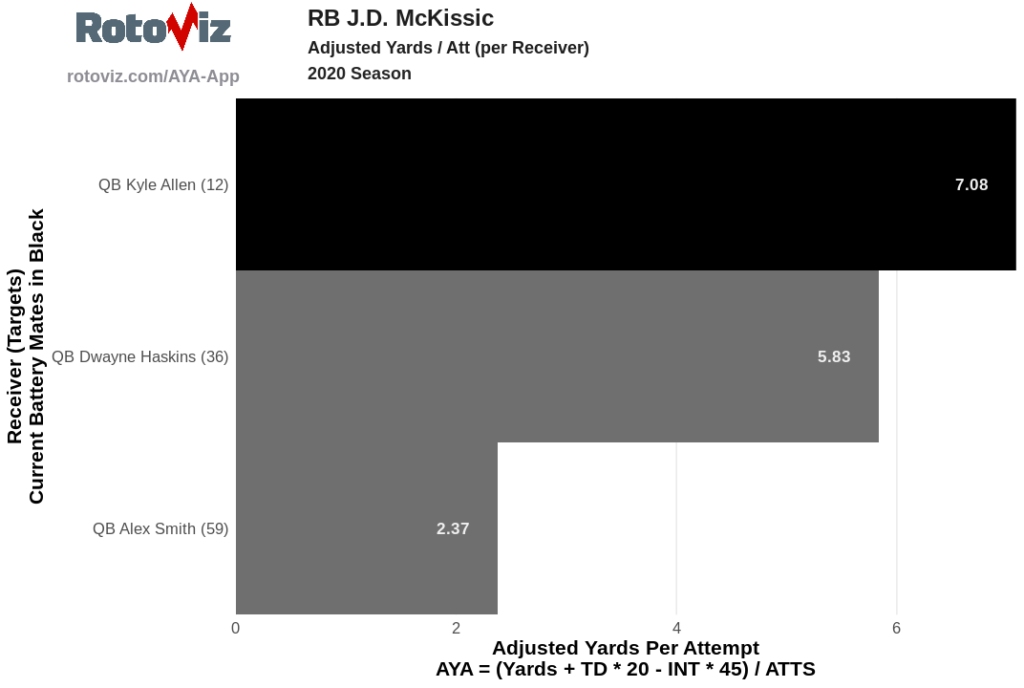 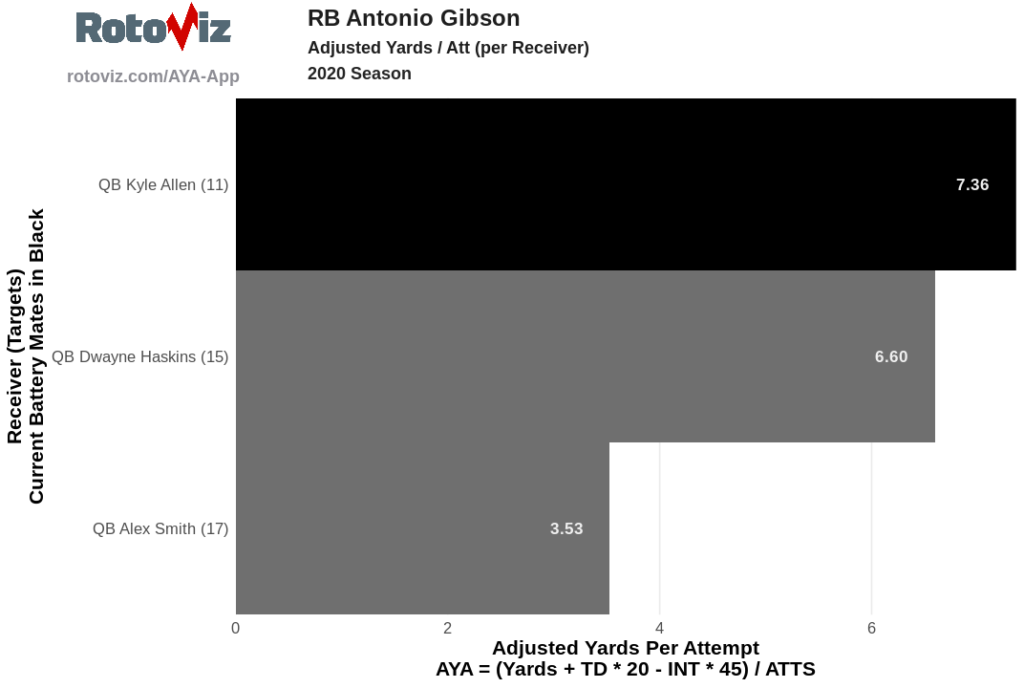 Using RotoViz’s AYA app, you can see that Gibson was more productive per target with all three Washington Football Team quarterbacks. Is that surprising? It shouldn’t be.

McKissic, although he’s maximizing his talents, is an undrafted running back that entered 2020 with 515 receiving yards in five NFL seasons. He more than doubled his receiving yards for his career in 2021, and was less efficient than Gibson regardless of which quarterback was under center.

Nothing against McKissic, but he’s simply a 28-year-old NFL journeyman that is facing competition from a 23-year-old freak athlete – one who is much heavier and faster than him. The Redskins shouldn’t hesitate when determining who should be receiving the snaps – they should have Gibson on the field as much as possible. The reports from beat writers seem to indicate as much.

Gibson has been one of the league’s most hyped players this summer. The Washington Football Team beat writers haven’t stopped talking about how much he’s grown as a player.

Washington RBs coach Randy Jordan said Antonio Gibson’s improvement in year two is “like night and day.” Jordan believes in Gibson’s ability as a receiver. “I think that’s something we haven’t really tapped into a lot,” Jordan said after minicamp. “I think the biggest thing for him is utilizing his ability to catch the ball because he has caught the ball in college.”

Like Johnson, Gibson is an athletic freak with receiving ability. After 34 career collegiate rush attempts, Gibson took the league by storm as a rookie.

By all accounts, he looks significantly better this offseason and the Redskins have consistently declared their intent to feature Gibson more as a receiver.

We know that Ryan Fitzpatrick loves to throw the ball downfield and doesn’t dump off as much as WFT’s quarterbacks last season. But if he begins to target Gibson more down the field, the differences between him and Johnson may be even harder to find.

In 2016, during David Johnson’s league-winning season, I wrote about why he should be the RB1. This year, Antonio Gibson is my must-draft running back.