My research into the Yards Per Target (YPT) statistic has provided me with a greater understanding of how important this stat is towards future production for receivers. The studies created curiosity which leads to questions such as the following:

Is there a way to use YPT to help us determine players to avoid the following season?

Knowing how predictable and important YPT was for rookies, I wanted to dive in and see how it affected the established top receivers in the game. If a top wide receiver had a season under eight YPT, did he tend to fall off the next year? And if he did, by how much? Let’s start to see what we can find.

To begin, I took all receivers who finished as a WR1 (defined by those who scored 245 or more PPR points) with a YPT under eight. I categorized those players using the RotoViz Screener. An excellent feature of the RotoViz Screener is it gave us an output of the player’s stats in the following season.

Let’s see how the qualifying wide receivers performed in the following season. 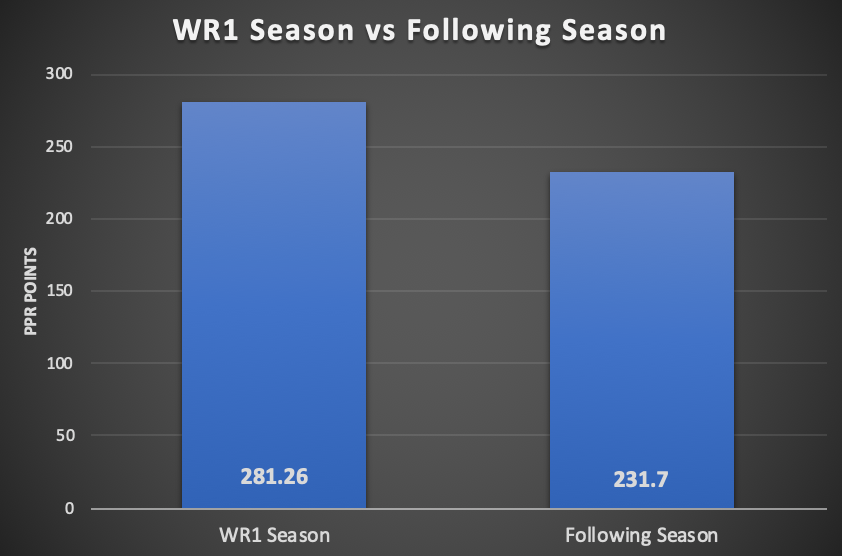 At first glance, we see an interesting discovery. These WR1s saw an average decrease of 49.55 PPR points in the following season.

I originally filtered it to all players who played at least 11 games the following season, but I wanted to see what the difference was if we adjusted the games played to equal the same amount as in the WR1 season. This way, we’re ensuring that injuries are not the catalyst in the decrease in production. 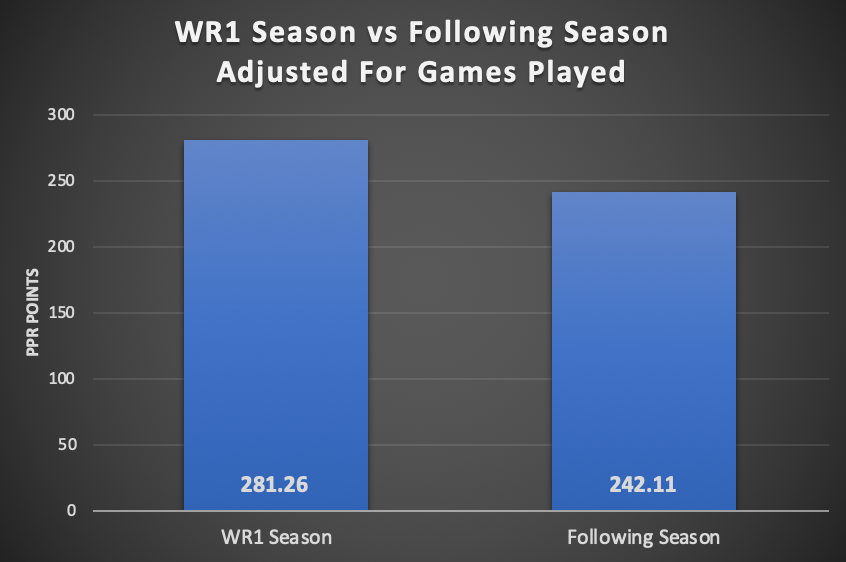 We still see a massive decrease in points as the WR1 loses on average 39.15 or sees a decrease in fantasy points by 14% the following year.

Why Did The Players Decline?

A good explanation is what we see below.

Naturally, if you’re putting up a WR1 season while being inefficient, then you’re likely seeing a bunch of targets. Although the reasoning for the target reduction is different for each player, it’s clear that this inefficient receiver group isn’t seeing as many targets as the prior year.

What happens when we adjust for age and break players up into two groups: WR1s who were still in their prime, 22-28 years old, and the rest who are at or nearing a decline at 29 or older? Will this help us define which players are truly the ones to be avoiding?

The sample size is reduced to 25 receivers.

Let’s compare this with the receivers who were 29 or older in their WR1 season.

This shouldn’t be a shocker to us – we already know from our very own Mike Braude that receivers start to decline once they hit their age-30 season. If a receiver 29 or older has a WR1 season under eight YPT then they are a clear avoid the following year.

Applying Our Knowledge To 2020

Knowing all of this information about inefficient WR1 seasons, how can we use this to help our process next year? Let’s look to see if any players fell under this specific criterion during the 2019 season.

We see three players who were able to produce WR1 seasons without hitting eight or higher YPT. Knowing what we know now, it’s likely that these players will decrease in production in 2020 – although that may be true for all WR1s.

DeAndre Hopkins may be a different story as he was one of the seven players listed in this study who was actually able to improve on a WR1 season with under eight YPT (2017-2018).

Regardless, this does give us some pause when it comes to drafting Hopkins in the first round next year in re-draft leagues. In dynasty leagues, he’s a sneaky sell-high candidate. Not only is it likely he declines in fantasy points next season, but Hopkins also just finished his age 27 season which is a peak season for WRs.

Allen Robinson finally had a bounce-back season this year and finished as a WR1. Unfortunately, his lack of efficiency doesn’t bode well for next season. Obviously, the poorer efficiency is not purely his fault (see Trubisky, Mitchell) – and it’s possible we see a quarterback change for the Bears this season. A case can be made for Robinson as an avoid candidate in drafts this year, but considering his current price and odds of leading the NFL in targets, I’m okay with drafting him. In dynasty, he is a sell-high candidate coming off an excellent age-26 season with uncertainty at quarterback.

Julian Edelman had a great fantasy season, but sadly this was more likely than not his last finish as a WR1. Due to his age and uncertainty with Jarrett Stidham at quarterback, he is still someone who we should be avoided at all costs. Heading into his age-34 season, the wheels are likely to fall off soon.

Thank you for reading! Hopefully, you learned something new from this article like I did. It’s never too early to start preparing for next season and getting informed now will help you out in your dynasty leagues and how to approach values with players.