Why You’re Not Selling Running Backs Early Enough In Dynasty

This is an interesting time in the dynasty running back landscape in dynasty leagues, as we are starting to see some of these top running backs reach and pass over the age apex for running backs.

At the same time, the 2020 draft class is one of the stronger running back classes in recent memory with five great prospects at the top. How do we approach this in dynasty and how can we best maximize the value for the future of our dynasty rosters?

We know not all RBs are created equally. Draft capital is a key component in determining future success and the upside of a running back. Since 2000, 83.8 percent of all RB1 seasons have come from rounds one through three in the draft. It makes sense for us to focus on these running backs when evaluating the career values of a running back.

All of the data for this article is from running backs who have been Day 1 or Day 2 picks and have played at least one season since 2000.

Understanding the longevity of a running back’s career is a staple in dynasty leagues. When do players start to lose productivity and how can we use this knowledge to our advantage?

By graphing the ages, we can see how old most players were when they played. 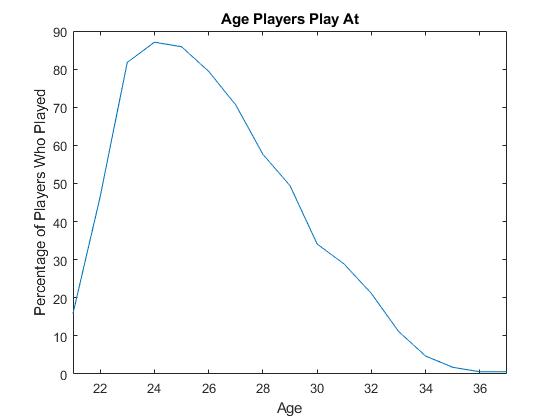 We see the peak age range for running backs in the NFL is between 23-25. After age 25 we start to see sharp declines each year all the way until age 30, when only one-third of all highly drafted running backs are still in the league.

What happens if we split up this data by draft round? 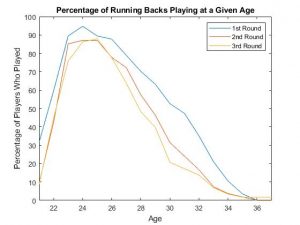 We see first-round running backs have a more gradual decline than the day two running backs. This makes sense as the most talented running backs are usually selected higher and therefore are able to have better careers.

The 2nd round picks are ever so slightly more productive than the 3rd round picks, but there’s really not much of a difference between the age curves them.

This graph provides us with an interesting takeaway. We see that 21-year-old running backs actually score more than any other age group. The decline after age 21 is likely due to incoming rookie RBs who are 22 and 23, and they don’t score as much during their rookie year. It also could hint that selling after a player’s age 21 season isn’t a bad idea. We see a decline in production as they get older and players start to fizzle out of the league.

This would be equivalent to the average WR43 finish since 2000 that would equate to 150.9 PPR points. If you were to replicate the back-end starter for flex it’s ~147 PPR points, but for this exercise we are using 150.9 as the “replacement value”. This replacement value is nearly identical in 2RB/2WR/2FLEX leagues.

What Does This Mean?

When accounting for the productivity of a running back based on age, they start to lose value heading into their age-24 season. We see the biggest jump in value from age 21 to 22.

What Can I Learn From This?

We should be replenishing our dynasty running backs much more frequently than we realize. Target age 21 rookie RBs in dynasty and sell RBs after their age-23 season for peak value, and over time you’ll gain value.

Is There A Better Way To Break This Down?

One thing to keep in mind for the future is the league-wide devaluation of running backs in the NFL. We may start to see 1st round running backs trickle into the 2nd round. We saw a glimpse of this in the 2020 draft as there were five strong running back prospects, but the first one was drafted at pick 32.

Naturally, the value over replacement will change if you are in a bigger league due to the replacement level player being worse.

Here’s how the value of dynasty running backs changes if you are in a 14 and 16 team league.

Here’s a look at the year by year change in value.

After reading through these findings, we can conclude that we want to target 21-year-old running backs and that young 1st round RBs have a longer shelf life to gain value.

These are the players we should be aggressively targeting in dynasty leagues:

All five rookies fit in a strong cohort to increase in value as they will be playing their rookie season at age-21 and had round 1 or round 2 draft capital.

Josh Jacobs also puts himself in strong company to increase in value as he is going to be playing this season at 22 years old. His first-round capital means his career value will likely peak at 24 rather than 23 for running backs who are drafted later.

These players should have immediate production and continue to accrue value heading into next season.

Basically any running back who was drafted in Day 2 of the NFL draft and will be entering this season at age 24 or older is a sell candidate in dynasty.

All of these players are at a point in their career where the average running back begins to decline in value. They have likely hit their peak value in dynasty. It makes sense to flip these assets now and replenish for more youth at the position.

Running back careers are peculiar in how short of a span they have before they start to decline. If we want to maximize the value and production of our dynasty rosters then it makes sense to constantly churn running backs in dynasty. The last thing we want is to hold onto a running back asset one season too long (just ask how Todd Gurley, Melvin Gordon, and Le’Veon Bell owners feel right now).

Our focus each year should be to acquire rookie picks to draft day 1 running backs, especially those who are 21 years old. Also, selling our day 2 running backs after they finish their age-23 season and day 1 RBs after their age-24 season will net us constant profits over time.

This sentiment comes with the idea of always being ahead of the curve. It’s always better to be a year too early on a player than a year too late. Employing this mindset when it comes to running backs in dynasty will improve your team as time goes on.

Thanks for reading! Hopefully you learned something new like I did. Stay tuned for other position groups. If you aren’t following me on twitter yet, you can do so @DaltonGuruFF. You’ll find daily tweets and my thoughts on players and strategies as we enter the season.

Huge shoutout to my younger brother Jeremy for help with crunching this data and creating the graphs. This wouldn’t have been possible without him. As always thanks to Pro Football Reference and RotoViz for the amazing data that allows this all to be possible.