Rarely does a draft class contain both the floor and ceiling of 2021’s rookie quarterback cohort, which has a chance to be the best class of quarterbacks since 2004 (Eli Manning, Philip Rivers, and Ben Roethlisberger). Generally, the Apex blog doesn’t consist of multiple articles about individual rookie quarterbacks. But when that’s where the value in the market is, that’s what we’re going to write about, especially with a player as intriguing as Justin Fields.

Betting on 2021 rookie quarterbacks such as Fields and Trey Lance is likely to pay dividends, as the strength of this QB class makes them likely to produce sooner rather than later.

A much-heralded five-star recruit out of high school, Justin Fields transferred after his freshman year at Georgia to Ohio State where he would start as a sophomore. He proceeded to set the NCAA ablaze in 2019 with a 41/3 TD/INT ratio on an uber-efficient 9.2 yards per attempt while rushing for 484 yards and 10 more TDs. Fields finished as a Heisman finalist that year, only to fight his way through an impressive COVID-19-shortened junior campaign while still posting a 22/6 TD/INT ratio with 262 yards per game and 5 rushing TDs.

He was widely considered the 1B to Trevor Lawrence’s 1A by draft analysts, especially after running a 4.51 40 at 6’3″ and 227 lbs. Considered a taller Kyler Murray crossed with a young Robert Griffin III, Fields somehow fell to Chicago 11th overall (a trade-up) after the Jets and 49ers fell in love with Zach Wilson and Trey Lance, respectively. The Bears finally look like they’re out of QB purgatory with this special signal-caller.

Matt Nagy (who was Andy Reid’s prized protege not long ago) is likely coaching for his job, and he is not going to be continually trotting out Andy Dalton – who finished 28th in the NFL in A/YA (adjusted yards per attempt). That finish is five spots behind old friend Mitch Trubisky, and ahead of only Tua Tagovailoa, Daniel Jones, Drew Lock, Nick Foles, Alex Smith, Carson Wentz, Sam Darnold, and Dwayne Haskins. One could easily argue that Dalton had the most weapons of this group – throwing to Amari Cooper, CeeDee Lamb, and Michael Gallup. Dalton has proven that he no longer deserves to be an NFL starter.

Nagy has his franchise savior waiting in the wings in Justin Fields. Ignore reports that promise Dalton the starting job – even if Dalton makes 2-3 starts at the beginning of the year, it’s unlikely he sees the month of October with their first unit.

Running Rookie QBs Are More Fantasy-Relevant Than Ever

We know that rookie quarterbacks are starting more than ever, but they’re actually performing at a high level. Thought 2011 Cam Newton (overall fantasy QB3) and Robert Griffin III (QB5) were rookie outliers? Think again. Since 2017, there has been at least one rookie passer among the top-14 QBs in terms of fantasy points per game: Deshaun Watson in 2017 (QB1), Josh Allen in 2018 (QB14), Kyler Murray in 2019 (QB13), and Justin Herbert in 2020 (QB10). I’d argue this year there should be two.

The key? Rushing production. Like Justin Fields, all of these quarterbacks came into the league with known rushing ability. If you average the per-game rushing production of all of the aforementioned QBs during their rookie seasons, we get an attainable average of 6.4 attempts for 40 yards and 0.45 TDs per game.

To further exemplify how important rushing production is for a rookie’s QB1 hopes, only 1 of the players mentioned above passed for over 21 TDs (Herbert), while only two surpassed 3,750 passing yards (Newton and Herbert). It’s simple: if you want a rookie QB to produce for your fantasy team, select the ones who are going to produce as a rusher.

Justin Fields fits this mold perfectly, as during his time at Ohio St. he rushed 10 times per game for 39.4 yards (a stat that would be far higher and more efficient if he wasn’t the only consistent offensive threat on his team in 2020) and 15 touchdowns in a total of 22 games. A tall, relatively heavy gazelle (99th percentile 40-time for QBs), Fields is a true running back in the open field. Matt Nagy found a way to have some rushing success with Mitch Trubisky – just wait until he gets his hands on Fields.

It’s no secret that the Chicago Bears have had a rough recent history with quarterbacks, especially selecting Mitch Trubisky over both Deshaun Watson and Patrick Mahomes. Last year’s dubious duo of Mitch Trubisky (24th in A/YA) and Nick Foles (32nd) somehow produced the 11th fewest passing yards on the 8th most attempts. This was mostly because of their complete ineptitude when throwing down the field, as shown by Rotoviz’s A/YA app. 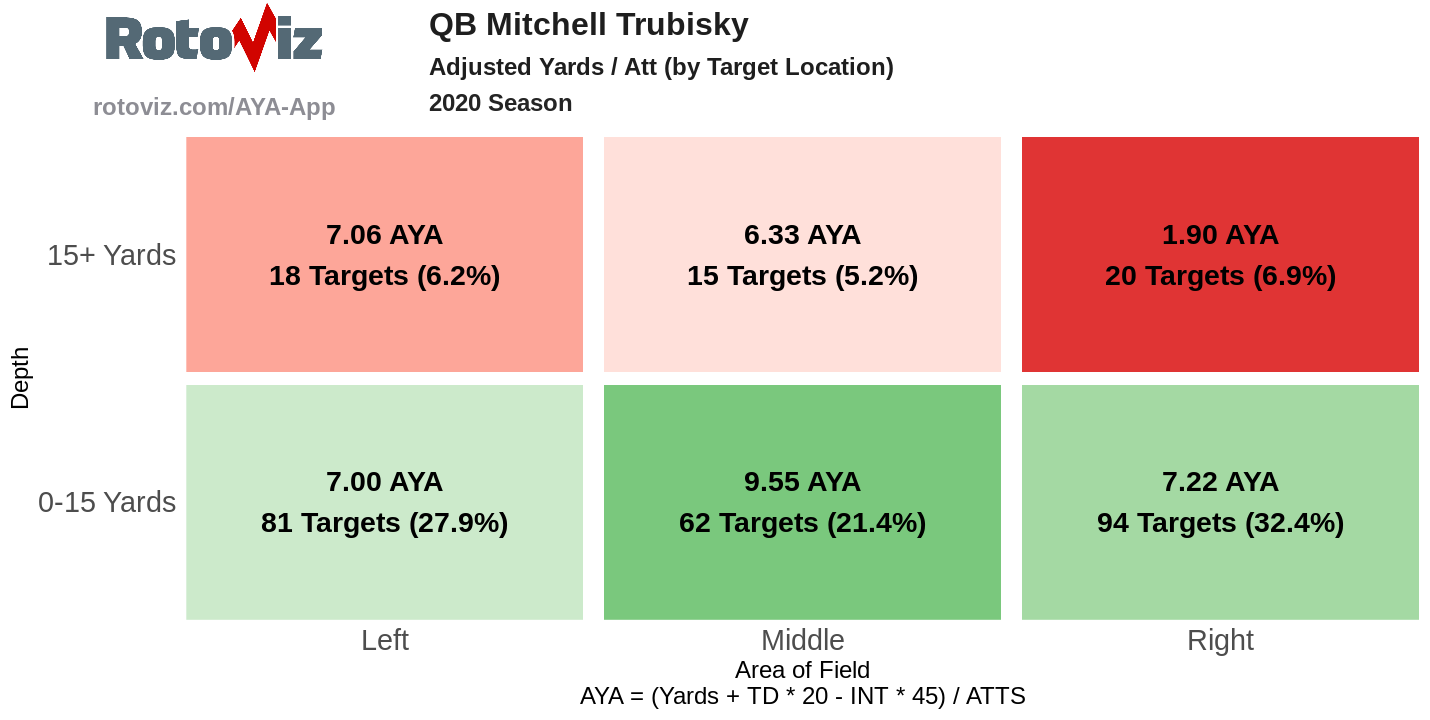 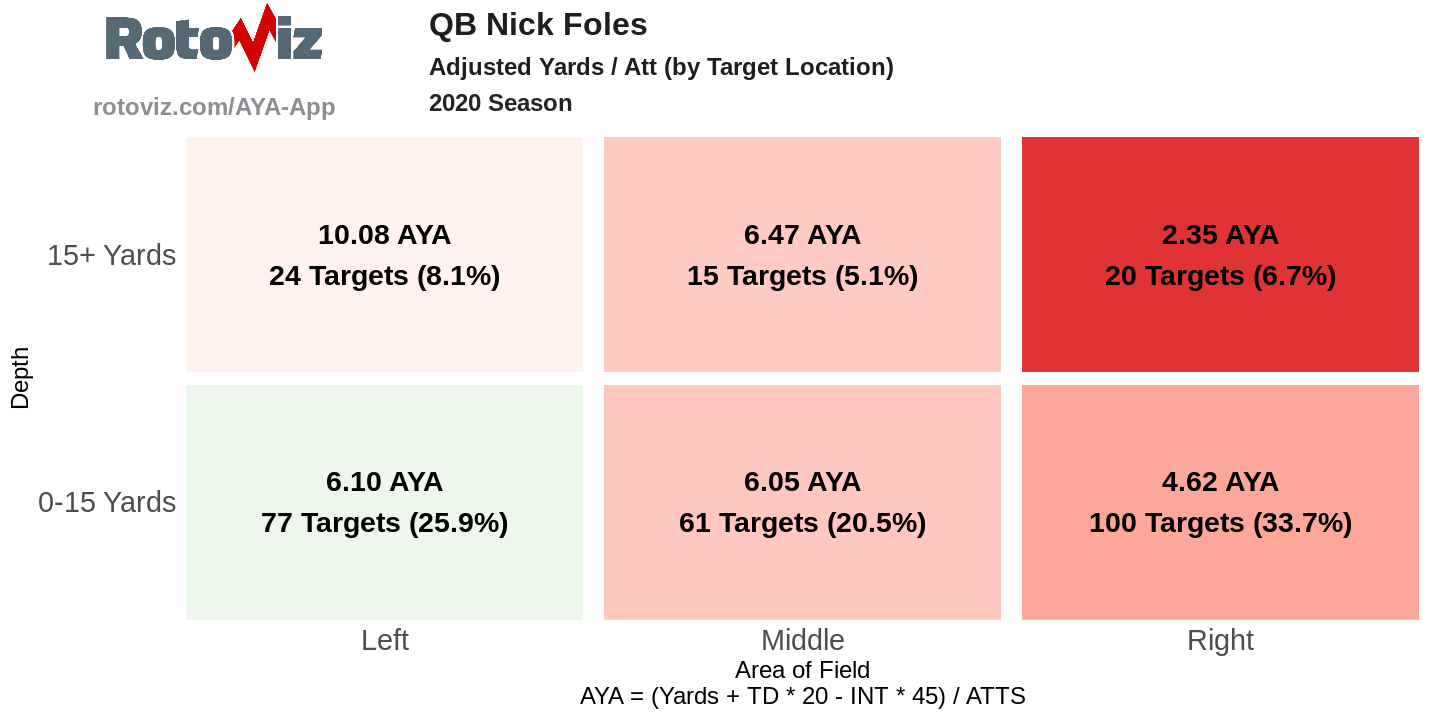 Considering they were throwing to a healthy Allen Robinson in his prime, these are downfield numbers that would make even Blake Bortles blush. Thankfully, our hero Justin Fields’s deep ball is among his greatest assets.

This isn’t a one-off highlight – he received an incredible 96.5 grade on downfield (20+ yard) throws. With Allen Robinson reportedly planning on reporting to minicamp and somehow only turning 28 in August (still in line for a high-end WR season), Fields is going to have a true 1A receiver with elite downfield abilities.

Let’s not forget about sophomore breakout candidate Darnell Mooney, who is in line to be the Bears’ WR2 after a solid rookie year that brings up some intriguing comparisons.

Suffering from poor QB play, Darnell Mooney wasn’t as efficient as we would’ve liked to see last season. But his high number of targets as a rookie is significant. Could benefit from Justin Fields’ deep ball. pic.twitter.com/0tsUW6m2pi

It’s rarely a bad thing to be on the same list as Tyreek Hill, Stefon Diggs, Doug Baldwin, and Greg Jennings (with honorable mentions to Jamison Crowder and John Brown).

The Bears also have a few other passing game pieces: Anthony Miller may still be returning, 2nd round sophomore (top TE in his class) Cole Kmet showed real rookie promise, and backfield mates Tarik Cohen and David Montgomery (54 receptions during Cohen’s 2020 injury-ruined season) are both true receiving threats. Throw in a revamped offensive line, and Justin Fields is stepping into a very underrated offensive situation.

Justin Fields was an elite recruit in high school who fully lived up to his hype at Ohio St., performing at a Heisman level as a true sophomore and junior while showing franchise QB-level ability on the ground and through the air. His skills as a pocket passer are evident on tape, illustrated by his production, and his elite rushing ability cannot be questioned with a 4.51 40 time.

Andy Dalton will not stand in his way, as top-end QB draft picks are playing and performing more than ever – especially the ones who can win with their legs. Their passing offense ranked 8th in terms of pure volume, and Allen Robinson & Co. are ready for a real franchise quarterback to take the reins.

The coaching staff is already planning on giving him ample playing time in the preseason, and it’s likely only a matter of time until Justin Fields is among the front-runners for rookie of the year. The Bears simply won’t be able to keep him off the field.

With a current ADP in the 13th round as the QB21, Fields is at least an ideal fantasy QB2 or QB-by-committee member with a real chance for a special, league-winning season who will cost you precious little. Make sure you’re drafting him over the Baker Mayfield’s and Matt Ryan’s of the world.